Towards the end of the first semester 5th Year Student Peter Lee was approached by The University of Manchester to design and make a large scale set piece for the student run festival, Pangaea. The event was held at the Manchester Academy and runs across many venues in Manchester. Pete described the project for us:

Â ‘The event’s theme was ‘Space Odyssey’ so designed a ‘wormhole’ with an elevated DJ booth as a focal point in the centre.Â Throughout the project I was working closely with Academy staff as the design had to both be both the right size for the room and mountable on the existing lighting rigs on the stage.Â
For ease of fabrication decided to use 12 identical interlocking triangle frames to create a portal, which sits in front of an aluminium circle truss with fabric panels to give the appearance of depth.Â The design was also created in coordination with a projectionist, who required a scale model for testing visuals on. By mocking up the design physically at 1:10 it gave me a really good idea of the structural issues faced by hanging a 4m wooden portal and helped me to design a bracing system’ 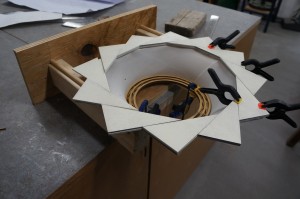 The model was made using components that would eventually come to life as large scale versions looking virtually identical. A wooden frame was used to support a focal hub and fabric was then stretched to the back of the segmented aperture-like ring at the front of the piece. 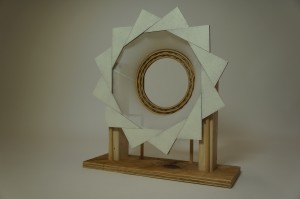 Once the design has received approval for full size production Peter went about turning the concept model into a full scale design. The triangular sections were each cut out using the larger CNC cutter at MMU before being transported across to B.15 for additional pieces to be added.

‘For the 1:1 build I found the CNC machine a really useful tool as it would have been nearly impossible to replicate twelve identical panels by hand – absolute precision was really important throughout the process as the projection maps only had a few cm tolerance for error. Although the digital methods I used were really basic (Sketchup) it was incredibly useful for working out the angles for the panel structure.Â
Another really important part of the project was getting logistics spot on – was quite limited for time due to university commitments so efficient use of workshop time was crucial and greatly aided by digital design tools. The panels were prefabricated over a month before the event, which meant the assembly was pretty straightforward.‘

Due to the obvious weight difference in the full size version of the prop each component had to be well built to avoid any accidents. Each triangular section was reinforced with pine timber baton which was glued and screwed into place. 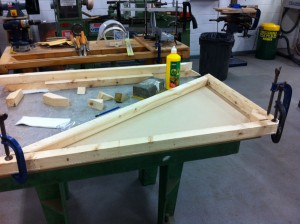 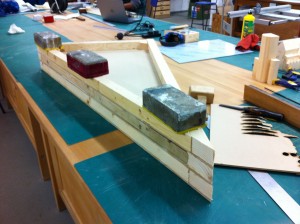 ‘Good communication with other parties was also key as the success of the project was highly dependent on fittings in the Academy and the synchronisation with projections. Resolving issues far in advance meant the on-site build and event itself ran smoothly.’. 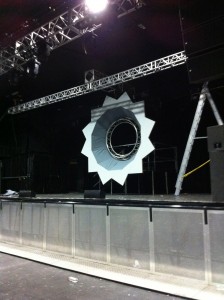 In place at the venue, the stage prop served as the focal point for the nights performers and was lit by constantly changing projections and light displays. The image below shows the piece on stage before the event began. The image below show the finished piece during the live event. 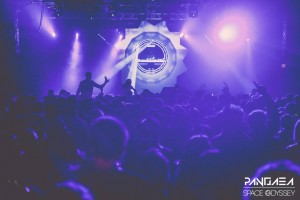 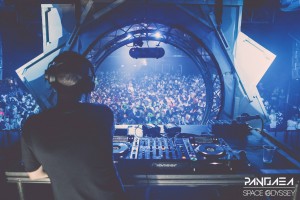 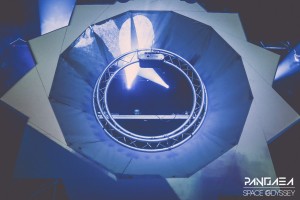 Comparing Peter’s prototype to the completed piece shows very little structural difference and is yet another example of how a test model can serve to prove a design idea. Both the development and final versions of the project will make great additions to Peter’s portfolio with the two conveying his design thought and testing processes to a potential client or employer. You can see more of his work here.