2020 will mark 50 years since the B.15 workshop was established here in what was then known as the Kantorowich Architecture and Planning Building. To celebrate the occasion we will be holding a number of events the first of which we are pleased to present to you here. 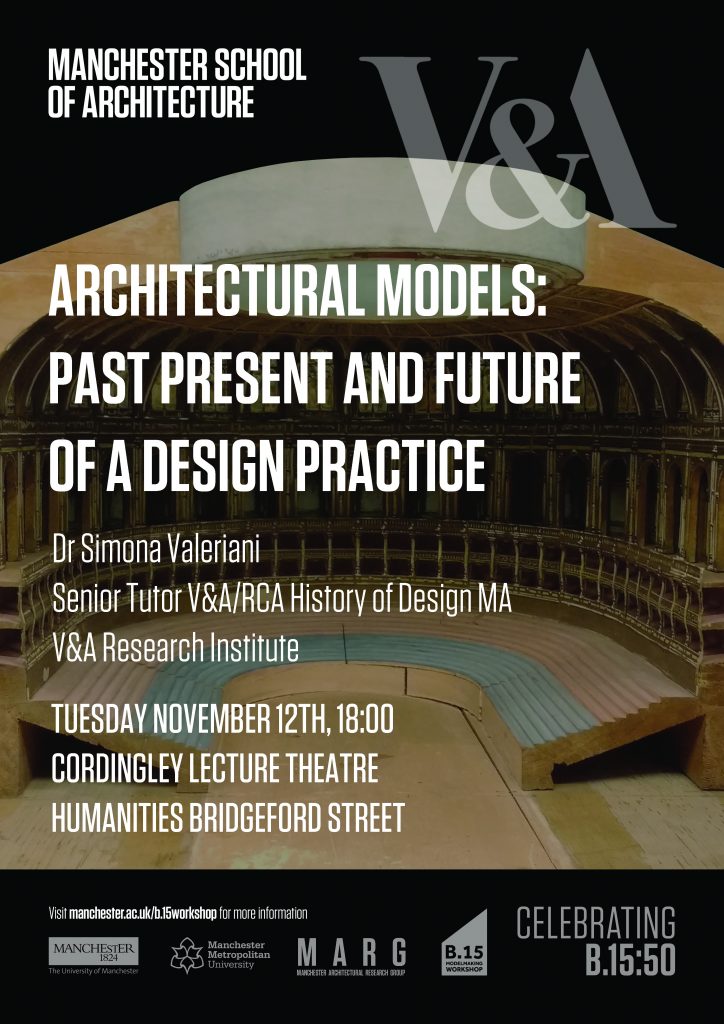 ‘Architectural Models: Past Present and Future of a Design Practice’ will be presented by Dr Simona Valeriani on behalf of the Architectural Models Network, a research network based at the Victoria and Albert Museum. “The network was set up to bring together all those interested in the history, current practice and future of architectural model-making. Its intention is to share knowledge, to take stock of the current state of the field, and to identify productive areas for future practice and research.” (Valeriani, 2018)

Dr Valeriani will present the up to date findings of the network which began recording a range of perspectives on architectural modelmaking in early 2018.

Please join us for this free lecture at 18.00 on Tuesday 12th November in the Cordingley Lecture Theatre on the ground floor of Humanities Bridgeford Street.

The presentation and Q & A will last no longer than 1 hour. No ticket required.

We hope to see you there, Scott, Jim & Saul 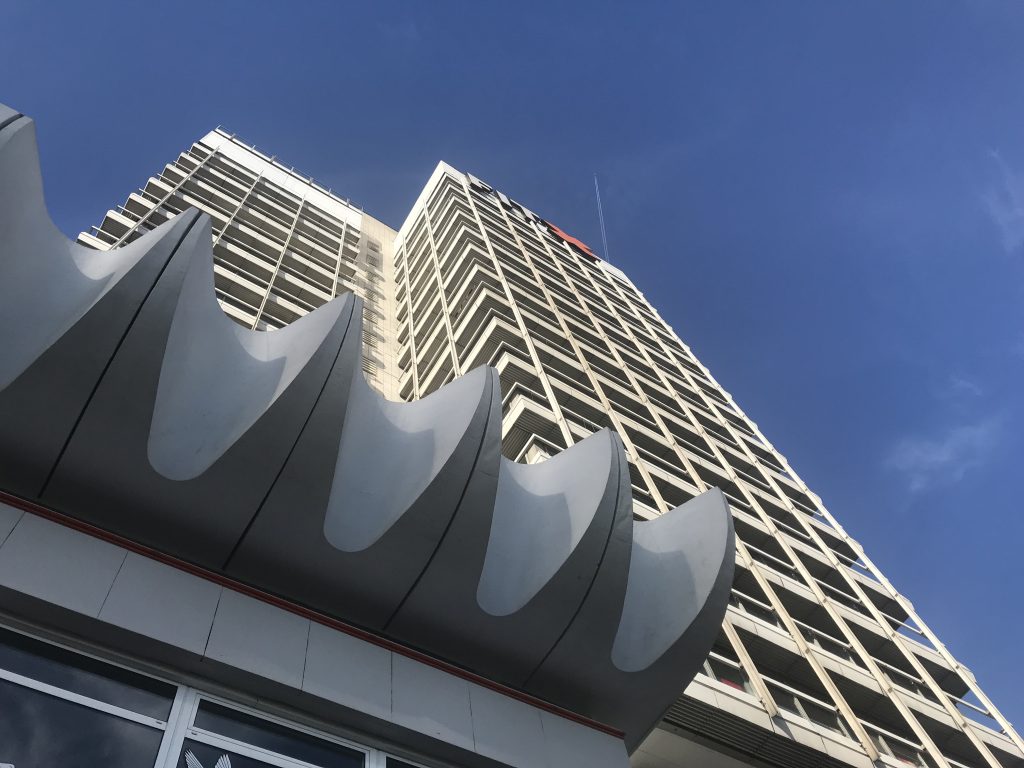 Earlier this summer I visited MSA Graduate Peter Lee at HENN Architects Berlin Office. Located overlooking Alexanderplatz, HENN is an international architecture office with additional offices in Munich and Beijing. They have a wide-ranging experience in work space, culture, health, education and research as well as production and master planning. It’s a great pleasure to see graduates take their modelmaking skills into practice. Where possible I always try to take the opportunities to learn just how these skills are used in their work and this has been one such occasion. Peter has been kind enough to discuss his experience over the last 3 years in practice since graduating from MSA.

After graduating from my masters in 2016 I wanted a bit of a change from Manchester so started applying for jobs in cities that I wanted to live in, mostly abroad, and HENN was the first place that got back to me. The job description was particularly interesting in that it was a mostly model making role within the design / competition team, which suited my skill set pretty well. 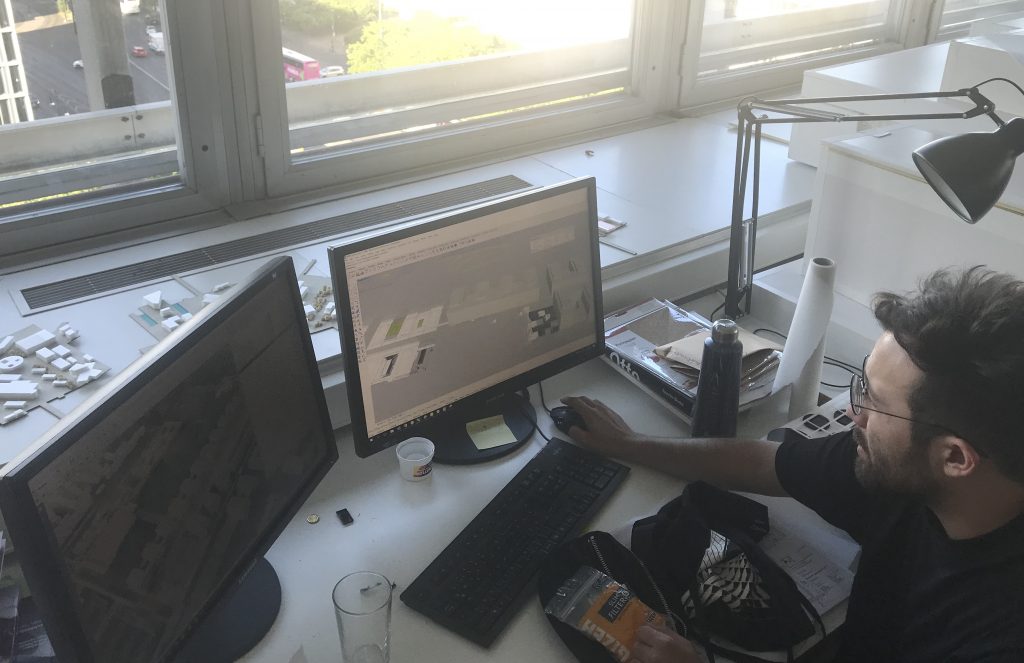 On a day to day basis I produce a lot of sketch models, mostly for internal use which really helps with making design decisions. Because of the fast pace of competitions (they generally last a month or two), people are often jumping between projects. Having a model in front of you is a much easier way of understanding site conditions, massings and contextual relationships than working purely with software because it has this tangible quality.

The workshop has a laser cutter, spray booth, hot wire cutters, disc sander, sandblasting cabinet and Ultimaker S5 3D Printer. Mostly we work with foam, card and acrylic – occasionally we get things outsourced or made in the HENN Munich office, which has more machines available for woodwork. 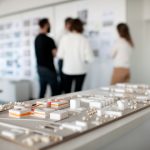 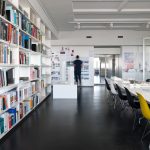 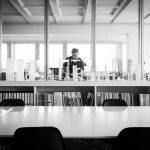 Looking out into the studio, Pete Lee at work in HENN’s Berlin Model shop. © Rainer Taepper

In terms of setup it’s a lot more restricted than what the students have access to at B.15 which is mainly due to spatial constraints. The office is located in a 70s East Berlin tower and there isn’t enough space for more equipment -however, it’s more than sufficient for producing competition / presentation models. It also serves a different purpose as a workshop for a commercial practice – B.15 is more about giving students the opportunity to learn and therefore supports a wider variety of techniques and materials that aren’t necessarily appropriate or efficient for me to use.

Most of my time is spent on massing and context models but it really depends on what is important to the project – it could also be façade models, mock-ups of internal spaces, more conceptual pieces etc. 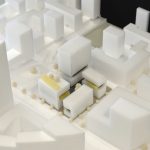 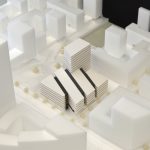 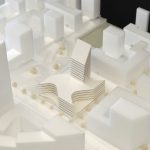 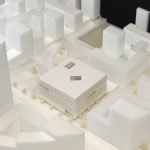 Around two years ago I produced a sketch model for an office tower competition in Hamburg which we went on to win. The massing was derived by cutting out foam slabs and arranging them to generate a stepping double height void moving up the lower part of the building. When placed in the context model and compared with other designs it was clear that it was the right way forward – while it was more conservative than some options it fulfilled all the masterplan requirements while retaining an interesting spatial logic. 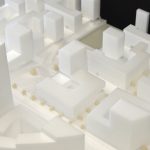 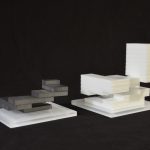 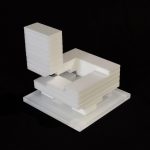 The competition was also a different format from usual in that we had a lot of contact with the client / developer during the design process. People always love it when you turn up with a model, especially if it’s not required – in this case we brought a lot of sketch models which gave an insight into the design process that the client wouldn’t normally see. It’s also more interesting to have something more tactile in front of you instead of being sat in front of slides and slides of presentation, which definitely worked in our favour. 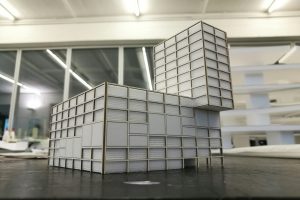 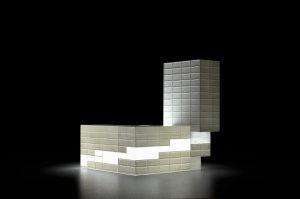 Leading practices at the moment like Morris and Co, Carmody Groarke are really pushing the use of models as an important design tool and it would be good to see that trickle down into the majority of practices. I have had two architectural jobs before this one – the only time models were around was for presentations and they were always built by a specialist model maker. Software is all well and good but I feel you can always make better design decisions if you have a physical representation in front of you.

If I could change anything about my work on a personal level it would be to be a bit more poetic with my model making through abstract / conceptual models and material explorations – most of what I do at the moment is pretty representational. Having said that, I really enjoy my job here. It can be long hours from time to time but it often feels like an extension of architecture school due to the quick nature of competitions and room to experiment. It’s also good to see models being used as a design tool and being able to use my skills to collaborate with other specialists, such as computational designers.

Thank you to HENN for allowing us to share this insight and to Peter for his thoughts, time and continued enthusiasm towards the work we do here in B.15. 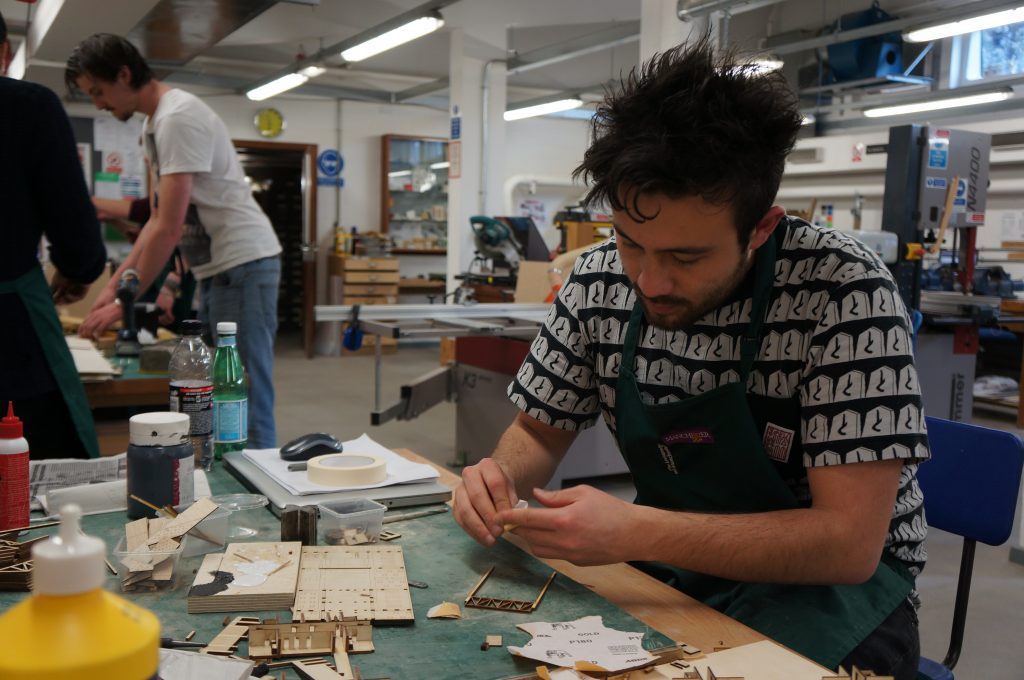 Peter at work in on his MArch final major project B.15 Workshop in May 2016