On a recent trip to Egypt I was thrilled to be invited by friends to visit a unique ‘eco-labratory’ experiment on the banks of the Nile. Elsewhere park is a private plot of land owned, maintained and developed by ex-pat Jules Johnson and her husband Naser. The park was set up as a long time dream of Jules to be able to create a haven away from the manic pace of Cairo city life. 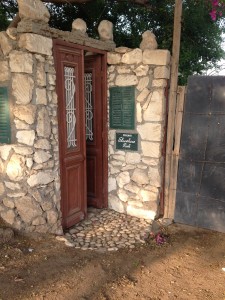 With limited experience of building Jules and Naser set out to build their ideal practical get-away for themselves and other ex-pats needing to escape. Jules had a very clear idea of how her ideas should look with certain aspects pending on material tests and availability. This gave a bespoke touch to the whole site which works fantastically. Even so Jules tried to define her ideas through designs in a professional manner. These designs met with confused local architects whom more often than not stick to a very generic set of bland construction rules that, to say the least, leave much to be desired.

With the usual stumbling blocks of building construction inevitable, things were made increasingly difficult by un-co-operative tradesman and a difficulty in sourcing good quality eco building materials.

Having heard of the difficulties in construction and seen the finished articles on site I was very eager to pass on the story of this fantastic place to yourselves and open up the possibility of a future collaboration on a live-project on the site! I thought it better that Jules tell the story so read my interview with her below to find out more.

With a little planning It may be possible for us to visit the site as a small group of students to take part in the experiments and contribute from our experience in MSA. If you are interested in finding out more please email me at scott.miller@manchester.ac.uk 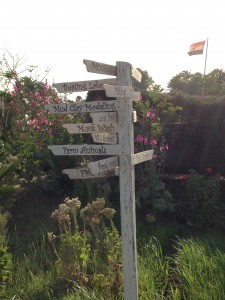 What is Elsewhere park and why did you decide to embark on such a project?

I am widely travelled and have watched the world go by from many a town square or roadside cafe. But not in Egypt.

After finding myself married to a local man, having a young son, very little income and living in a concrete sweat box in the middle of one the filthiest cities you will ever see, I decided to start exploring the countryside. We started to visit Nasers family more often in a village called Matania (meaning Germany) it’s a couple of miles south of the park. The poor conditions dissuaded us from using their toilets or considering staying overnight.

There are no centres or main shopping roads in any of the towns and villages and it’s inappropriate for women to be in a coffee shop. So. I needed somewhere close to build a proper, sit down Loo, At least we could spend more time there. 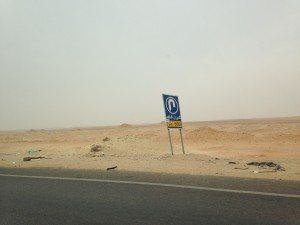 Was the park’s purpose always clear or has it evolved over time?

The park was not the first time we built but it was going to be the final time. We had intended to buy a piece of Nile River land, before it became illegal, to build our retirement house.

I was thinking more along the lines of the Victorian Sea Front shelters with rockeries around the inevitable but inappropriate, lawns. The ideas involving Elsewhere are evolving all the time. I love other people to share their ideas and enthusiasm.

I was very conscious of the dreadful conditions the local Bedouin people live in and the delicacy of their customs. A kindly Hungarian lady asked what she could do to help them and decided to open a little school. We allowed her to build a small room (the red brick one) in the Park, rent and electricity, with use of the kitchen and bathroom. This is now the shed and the Nile River School has moved to its permanent location in a purpose built and larger school, just up the road. 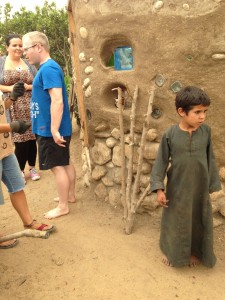 [Put simply] the park supports educational interests of both privately funded (Rich Cairo schools) and the Nile River School that survives on donations and volunteers.The park was created for rest, recovery and inspiration. It can be made available for education and certain types of entertainment. Private hobbies and dreams. I love the freedom to try anything and enjoy other peoples enthusiasm and experience that they have been willing to contribute.

Recently, a group of ladies I teach with needed somewhere at the Park to stay, instead of putting up tents. This is the building we are currently working on and you Scott, are the only bloke that has been allowed to do anything creative on it! 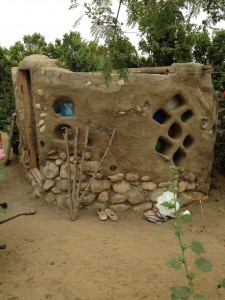 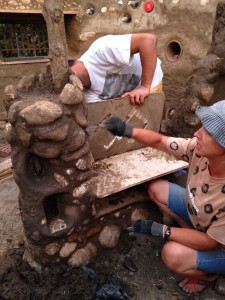 What inspired you to lead the design the buildings on your site?

I had to design the buildings myself as I spent 15 years in the Logistics field which always comes first in my considerations. I have no faith in the engineering judgments of most architects here and they would only communicate with Naser because 1. He speaks Arabic and 2. He is a Man.

Women have no business interfering in such things in Egyptian society.

What problems did you encounter and how did you overcome them?

Everyone here thinks and says you can’t do that, that’s not possible. So I go ahead and start the job myself.

There are many bribes to be paid at intervals but there were many more when we started. The Authorities take their share. River Authority, River Land Authority, Land Authority, Road Authority, Electricity Authority, Building Authority. Because I am foreign, all of our paperwork to do with the Park, is all perfectly legal to ensure we don’t lose it.

The first thing we did was build the road down to give vehicle access to the land.

The walls collapsed and the road fell down.

Next doors road also fell down and at this point I decided to take all building under my wing.

The first building had to be pulled down four times before we managed to get a license for electricity. This would then prove it was a lived- in building and therefore could not be demolished. This was the normal process. The law has changed since then and the Authorities are starting to pull down the swarm of buildings that have been put up since the other Authorities have been otherwise occupied. 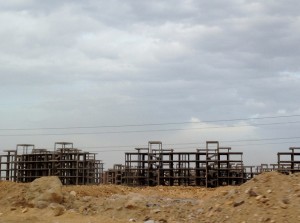 There are always problems with the quality of materials, all of the roof beams are twisted and most wood is full of knots and bark. The electricity is normally connected from the street lights and it runs your single light bulb via the window. Elsewhere Park has more light bulbs than the whole Ezbah (Hamlett) put together and more double sockets too. There have been so many problems!

Does the ‘try it and see’ attitude to building lend itself to the locality given the uncertainty of Material supplies? And do you find testing/prototyping beneficial?

I love to try it and see. I am not familiar with some of the local materials so I research their uses andÂ  use their transferable properties with my own transferable skills, to create an object with meaning and multipurpose. I am proud of some of my triumphs in the control of temperature and I can’t wait to put the roof on the Burrow (Cob) to see how I have performed with daylight. 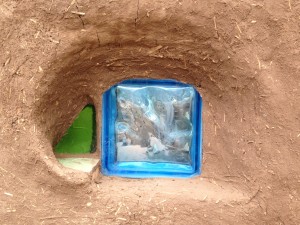 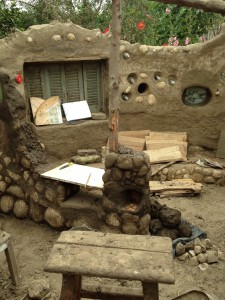 We encourage people to collect as much data from the Park as they can. If you need our help, just ask.

Does the eco/ethical consideration behind Eleswhere Park have potential to expand to other areas in the locality or Egypt as a whole?

Oh Yes. There are a few organisations that dabble in the recycling field but not many dabbling in Permaculture. Most countryside folk don’t have hot water. They have very poor ventilation but no insulation. (The Arabs invented air conditioning with a roof modification)

There is a need in the British Education Private Sector for workshops/presentations and other educational tools on eco-friendly subjects as we have no public parks, forests or accessible countryside. Many students attending these schools have architects and interior designers in their families and are ready to learn some common sense. Rich land owners prefer lawns and columns. Where nature is organized and trees cut into cylindrical shapes. Check out the history of the place and you can see Islamic ceramic influence in many things. 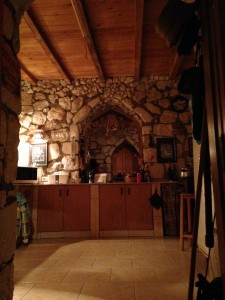 What do you hope to do with the site in the future?

I would love to see the Park full of little ongoing experiments, set up by some and monitored by many. We will continue to build. The next building may be from river reeds with the potential to pass this knowledge on to the local lads so they possibly make sun shades commercially. 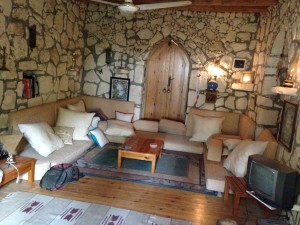 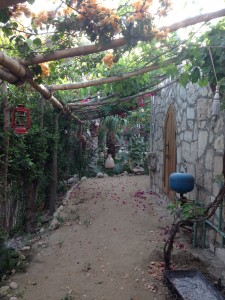 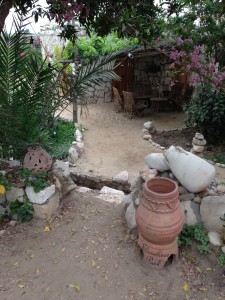 The next project (after the Burrow) will be to make a hot water system for the Castle showers. I would like to make this out of recycled materials and use solar power.

My dream for the Park is to make approximately 8 more buildings, using more and more local and renewable materials as possible. Here are some of the plans:

There will be a more extravagant Cob guest room,

River reed shelter with the possibility to extend this technique to the surrounding communities for roofing or animal shelter.

Wooden shed on stilts overlooking clay lined pond that may possibly be for aquaponics.

Workshop for my art stuff, tools and future projects. I would like to make a wood turning lathe.

Open kitchen on the end of the Castle block. 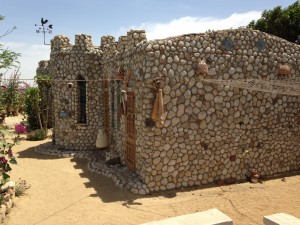 As the power will be unreliable this summer, I would like to start more seriously with renewable energy installations.

The cost of electric will be rising 25% shortly too. 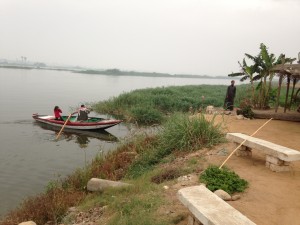 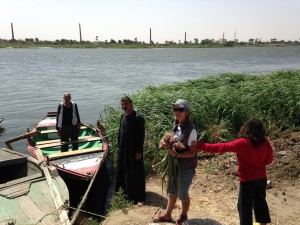 Have you considered collaborating with architectural institutes in Egypt to help develop and experiment with the site?

At the moment, I have no plans to involve the architectural institutes in Egypt as the Tutors are notoriously jealous of their powerful positions and the dated styles that they personally believe in. (They may even try to close the Park down, in case our ideas become popular with the rich and famous)

Architects and Tutors here are not usually willing to cooperate with any alternative styles or concepts, especially from women or foreigners as they see this as doing themselves out of a job. They also earn huge amounts of commission from the suppliers and manufacturers of the raw materials and from contractors and sub-contractors.

They also encourage the use of materials that are produced in Egypt, (by the military)but that have a high carbon footprint, such as cement, metals and plastics.

There are several historical and social influences to consider when wondering about modern day buildings. One thing that bothers me most is the complete lack of common sense when planning rooms, buildings and community areas. I believe that this complacency has had a long term effect on moral and society and I am finding that this problem is still being ignored , even in the high class areas.(we have 7 different classes of people in Egypt) 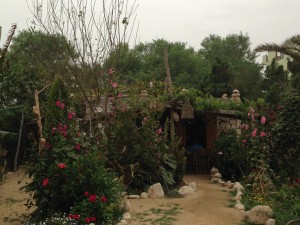 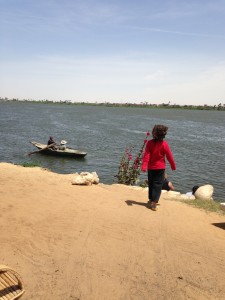 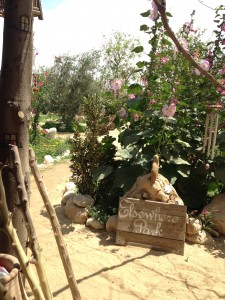 So. What are you waiting for?

The sun shines every day, its either warm or hot.

We have an almost constant northerly wind.

We have the longest river in the world which runs at about 5 knots.

We must be able to do something with all of that?

All the best, Jules